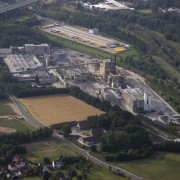 The acquisition of Steetley Dolomite allows Lhoist to supply dolime to customers in the UK steel industry for the first time, as well as providing an additional supply source for its non-UK dolime customers. In addition, the acquisition of Steetley adds new products to the Lhoist portfolio, opening further opportunities to supply dolime in the refractory and steel sectors.

Acquisition of lime activities of the NSL Group.